Robot competition, "The 2nd Wandahoo Robot Carnival Petit" in the 6th MONO CREATOR FESTIVAL 2009, sponsored by Mr. Ishikawa was carried out in TOKYO BIG SIGHT West 3 Hall, on Apr. 29th, 2009. Wandahoo Robot Carnival carries out two times, winter and summer, every year sponsored by Mr. Ishikawa who is the president of ‘Kanto (Tokyo region)-Gumi (group) Robot Training Meeting’. Every robot, not only biped robot but also with many legs could join the competition. The competition is administered by members of `Kanto-Gumi Robot Training Meeting`

Thirty robots joined the competition. Three types game, 2m foot race, Basket carrying race (pushing or pulling basket with 500ml-bottles for 1.5m within 1 min) and dice soccer ( points are depended on the spots of dice shot) was carried out. 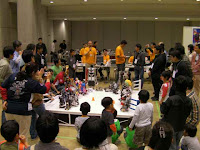 The competition stared at 12:00 and ended 17:00. Just four robots; Sarga(Igaa), Σ(Shimaken),automo 05 Go-Wan(holypong) and Striker(Hiroki), which got much point from the three games, could join the final battle match. The results of the final match were as follows. The winner was Sarga. The 2nd place was automo 05 Go-Wan. The 3rd place were Σ and Striker. 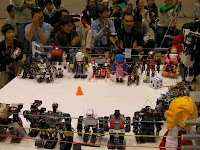 Thirty robots were also divided into 2 teams, red team or white team. In the case of competition of two team’s robots, winner robot team got points. The winning team was red team. At the end of the competition, ramble fight with 30 robots was carried out. The ring seemed to be too small to join all 30 robots.


The competition videos are as follows: