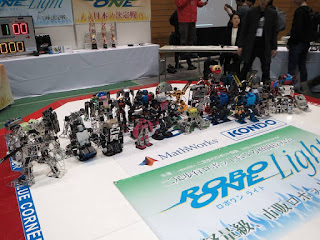 Seventy-one robots joined the 12th tournament. More than 38 robots were custom-built robot, UK1 (1kg or under). Other robots were officially recognized robots such as KHR-3HV.

Biped Robot Association uploaded videos of ROBO-ONE Light 12th to YouTube ROBO-ONE Channel.   Sanzai-san reported the details of  the 12th in his blog (in Japanese).


For the 3rd Place Match; koi mini2 vs i-Koi BRA
The winner was i-Koi BRA .


Final Match; gyu vs IGNIS
The winner was IGNIS.