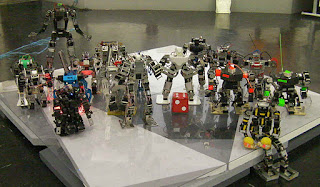 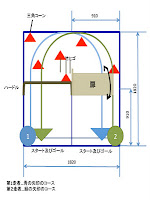 Robot Obstacle Race
Robot Obstacle Race Course had 4 kinds of obstacle such as Hurdle (30 cm height, 91 cm width), Corns, Chopsticks-road and Door.  Two robots started from right side and left side.  The winner was robot reached to the goal in the short time.  Fifteen robots joined the race.  The 1st place was Corteju 23 seconds 38, the 2nd place was G-Saaga 26 seconds 88 and the 3rd place was Chrom-kid 32 seconds 43.  The video of all races was as follows;.

Robot Battle Tournament
Nineteen robots joined the robot fight tournament. About the half of robot owners were students and the rest were working members of the society. The winner of the tournament was G-Saaga (Igaa-san). The 2nd place was Garoo (Kumama-san). The 3rd place was Corteju (Shibaura Institute Technology SRDC Team Corteju).  The No.1 popular robot was also G-Saaga. Videos of the tournament were as follows:

Looking for a robot competition that you can enter? Try http://salviusrobot.blogspot.com/p/2012-online-robotics-competition.html