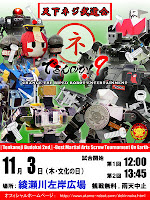 President Mister Tamao of Robot Pro-Wrestling, who is Omata-san planned not only wrestling match but also the back story of each wrestler character such as a real pro-wrestling match. Promotion of Deknnoka!9 have been uploaded.

Eight robots joined the tournament were Nagare-Gold, Zerfar, Thunderbolt, Wadahoo, Nagare-BLACK TIGER, Kyonkyon-Kamen, Waroo and G-Saaga.  Each robot had one Dragon Screw and the winner of each match could get all screws. Fighting rule was as follows; the winner was the robot which dropped out of the ring or knocked down his opponent. The winner of the tournament, robot gotten 8 screws could call Nejiron, God of Screw. Nejiron would answer the winner's request. These storys were similar to those of `Dragon Ball`.

The 7th Match: Battle Royal Match
The ramble match was carried out by the losers of matches.  At first the 1st robot and the 2nd robot entered the ring and began fight, after 1 minute later the 3rd robot joined the fight, then every 1 minute another robot joined the fight. The ring rope of all side were removed for dropping out of ring. The winner was the robot survived on the ring. The winner was Thunderbolt.

Ending : Announcement of the wish by G-Saaga, the winner of Tenkaneji Budokai
The winner G-Saaga asked Nejiron that he could have a match with Hammerhead, one of 4 God Robots of Kansai-District.  Nejiron answered that his wish would be fulfilled in the nest year. 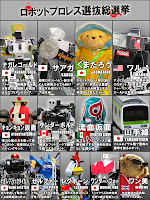 General Election
General election of all robot joined the Robot Pro-Wrestling Dekinnoka! took place after the tournament. Audience voted to their favorite robots. The 1st place robot would have the right to join the main event match in the Christmas Dekinnoka!10 which will take place at Tsukiji-Honganji Buddhist Hall in Tokyo on Dec 25, 2011. 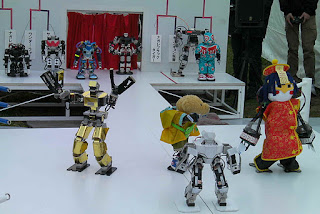