BestTechnology CO., LTD put FREEDOM jr.Ⅲ , a new humanoid robot kit on the market on Oct 15th, 2009. The characteristics of the new kit are as follows: 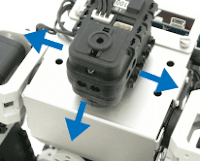 2) Sensors in the head
Equipping AX-S1 which builds in the infrared ray sensor, microphone and speaker in the head. Measuring the distance brightness of 3 directions on the front, left and right. Measuring volume of the sound, count of the clap sound and the time which measured the sound. Playback of designated possible buzzer sound with musical interval length. Infrared ray communication, internal temperature and applied voltage measurement.

3) Controller: FDIII-HC
Adopting the exclusive newly designed controller which covers all the Dynamixel series servo and can be used general-purpose. Controlling through USB (wire) and Bluetooth (the radio), state detection by the 3 accelerating sensor, motion data management with a microSD card, power supply voltage monitor and melody playback by the buzzer are equipped as the standard functions.

4) Software: GCC Developer Lite
The software does consistently from programming with C language to the program download to the robot and the communication with the robot.

6) Development of the original robot
As the communication protocol of the Dynamixel series is common, the kit robot can change to the higher specifications robot by using the actuator upgraded without the substantial modification of the program.

8) Wireless control
The control board loads Bluetooth module as standard. PC loaded Bluetooth (or Bluetooth was increased) can download of program and communicate to robot which put program in practice. Wireless Controller (option in the case of Basic kit ) can control the robot with wireless.

9) Robot assembled
As the robot is assembled, the time to introduction is short. There is no worry of the trouble with assembly mistake. As the adjustment of home position and download of the sample program have done beforehand, operation verification is possible immediately.

10) suitable user
FREEDOM ji.III, is more suitable for robot builder who is interested in the C language programming but do not have enough ability, who would like to learn about function needed in the multi axial robots, who would like to make application using feedback of the outside, who would like to verify with small-sized ones and to actualize sooner or later of expansion and enlargement utilization.

A robot kit is a special construction kit for building robots, especially autonomous mobile robots. The kits can consist of: structural elements, mechanical elements, motors (or other actuators), sensors and a controller board to control the inputs and outputs of the robot. In some cases, the kits can be available without electronics as well, to provide the user the opportunity to use his or her own.

Appreciation for nice Updates, I found something new and folks can get useful info about BEST ONLINE TRAINING