Robot Fight, "The 2nd U1K, Under 1 Kg" sponsored by RT Co., Ltd. was carried out at RT Office in Akihabara, Tokyo on Oct. 24th, 2009. While the ROBO-ONE humanoids have set the standard under 3 kg at the 15th Championship on May 4th, 2009. Some hobbyist just don’t have the space, resources, or budget to get actively into building large robots. To expand the playing field, RT Co., Ltd. planed an Under 1 Kg biped robot competition. 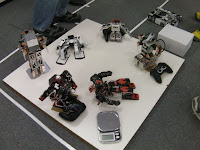 The rule of the game were as follows; Field size: 90 cm square board, robot got 3 downs within 3 minutes was winner, robot gone down from the field was loser, robot could not stand up within ten counts was loser.

The winner was Soga, original robot developed for throwing fight using small size servo by Mr. Igaa who also developed `Saga`. The 2nd Place was Pixie based G-ROBOT by Emanon. The third place was Dampthi-kai.

The semifinal, 2 maches were Pixie vs Shunran, Danputhi-kai vs Soga. Winners were Pixie and Soga.

The final match was Pixie vs Soga. The winner was Soga by Igaa. The 2nd Place was Pixie by Emanon.

The ramble fight was carried out with all robots joined. The winner was also Soga by Igaa.