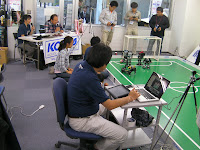 The 22nd KONDO CUP Robot Soccer Game took place at ROBOSPOT in Akihabara, KHR Class on Oct 2nd and Open Class on 3rd, 2010.  The games were shown on `Ustream KONDO CUP Channel` from 1:00 pm to 5:00 pm (JST) and the final game video are keeping in the Channel. 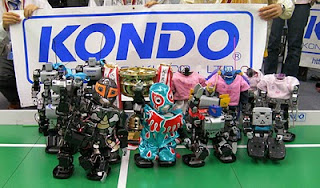 Six teams (20 robots) joined the KHR Class on Oct 2nd were divided into 2 preliminary leagues. A-league teams were RFC Autumnleaf, Individual-team-1 and Clark-Akiba-Robot-Course. B-league team were Kamikaze (Individual-team-2), Kanto-Branch and J-SKY. Each league had league games and the 1st place team of each league had a final game. The 1st place of A-league was Clark-Akiba-Robot-Course and the B-league was Kantou-Branch. The winner was Team ROBOSPO, which team members were Saaga as gool keeper, KHR-3HV-1 and KHR-3HV-2 of ROBOSPOT. Result of final game were the 1st half 0-0, 2nd half 0-0 and 1-0 in the overtime by a sudden death goal of Saaga throw-in.  Video of the Final game is keeping in Ustream KONDO CUP Channel.   The result is also described here.