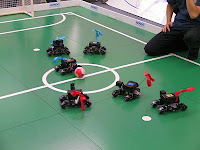 Demonstration soccer game of animal robots, KONDO CUP Animal Class game took place for the first time.  Six turtle model robots,  New KONDO 4-Legged Robot put on the market in July, 2010 joined the game.  Two of six robots with KCB-3WL, a new lan board  were controled through the camera on the robot.

Video of Prepareing the Animal Class Game was as follows;

As the regular rule for Animal Class has not been decided, KHR Class rule was applied. The 1st half time of the game was 5 minutes, the break time 1 min and the 2nd half was 5 mins.    Video of the game was as follows;


KONDO Co. Ltd. announced a plan of Animal Class Robot Soccer in the end of this year.

Thanks so much for your post, pretty useful information.