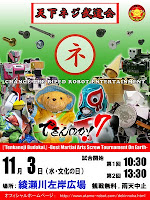 Robot Professional Wrestling Match, `Dekinnoka!7`, sponsored by Omata-san will take place in Soka City on Nov 3rd, 2010 during Soka Fusasara the 19th Soka Chamber of Commerce and Industry Festival. The 1st stage (open rehearsal) takes place 10:30 am to 12:30 and the 2nd stage 1:30 pm to 3:30 pm (JST).  The relay on `Ustream Dekinnoka Channel` has been canceled.  My custum-built robot `BLACK TIGER NEO` also will join as `Nagare BLACKTIGER`.

`Dekinnoka!` in Japanese, means `Can you do it?`. As Omata-san has been loving real professional wrestling, the 1st Robot Professional Wrestling in Soka on Nov. 3rd, 2008 was planned and held by him. He explained the 'Robot Professional Wrestling' was not 'Wrestling' but 'Fighting Arts'. The purpose of `Dekinnoka!` was not only robot fight but also to inform pleasure of robot.  Promotion and report of Deknnoka!6 have been uploading in this blog.

President Mister Tamao of Robot Pro-Wrestling, who is Omata-san planned not only wrestling match but also the back story of each wrestler character such as a real pro-wrestling match.Detail of the each match is as follows; 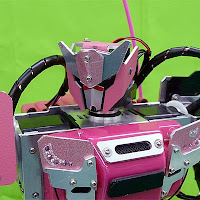 Opening Match: World Try Out Match
Dyuminus vs Wit-lazer
Vitlazer is from Belgium. Dyuminus, a female robot is known to the strongest beginner of robot fighter. She is a champion of the 2nd Kantou Heavyweight Tag Championship.


Opening: Flying of Kyonkyon-Kamen
Kyonkyon-Kamen is known to TOKOTOKOMARU with funs in the 18th ROBO-ONE, will try flying in the air.

The 5th Match: Mascara Contra Rename Captain Fall Elimination Match
Kantou-Branch vs Robokko
Team lost the match when the captain is falled. Robot team lost the match, has to remove mascara or change the team name on the spot. Kantou-Branch and Robokko had a game in the 21st KONDO CUP KHR Class and the game ended in a draw.

Eight robots join the tournament. Each robot has one Dragon Screw and the winner of each match can get all screws. Fighting rule is as follows; the winner is the robot which drops out of the ring or knocks down his opponent. The winner of the tournament, robot gotten 8 screws can call Nejiron, God of Screw. Nejiron will answer the winner's request. These story is similar to that of `Dragon Ball`.

Wrestling Match, the ring surrounded by 3 ropes with red and blue corner like a real Professional Wrestling is preparing in Soka City. Omata-san carried out 8 times `Dekinnoka! as 1, 2, 2.5, 3, 3.5, 4, 5 and 6` during 2 years. `Deknnoka!` has been also supported by the members of Kanto-training-gumi (group).