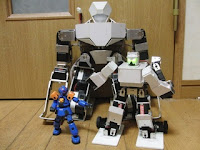 Igaa-san opened his new type biped robot 'Roller-Dash' which feet equipped wheels at his blog site (in Japanese) of Ropotal on Sep 16, 2011.

I think it is the first type biped hobby robot moving with wheels. Weight of the new robot is 404 g and it's height is 17.5 cm, for UK1/2 (Under 500 g).   You can recognize the size of the robot compared with the picture of 'Saaga'.   He wrote in his blog that he developed with a lot of failure and his unique robot was also developing.

Hey, there's so much useful material above!