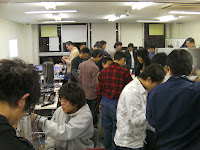 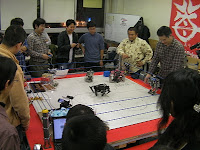 The 47th Kanto (Tokyo region)-Gumi (group) Robot Training Meeting was held at ‘Robotoma.com’ , robot shop in Itabashi, Tokyo on Feb. 14th, 2010. The meeting was produced by Mr. Ishikawa , who is the leader of Kanto-Gumi. He is also the sponsor of enjoyable competition, `Wonderful Robot Carnival`, which takes place 2 times every year in Tokyo. Kanto-Gumi is consisted with about 20~30 members. Everybody has a robot, could become a member of Kanto-Gumi when he joined the meeting. Robot shop or public meeting room is used for meeting.

The purpose of the meeting is not only robot fight training but also exchanging information or know-how about robot making. Usually attendants practice robot fight, but attendants sometimes fights a duel with his rival before members. The meeting is scheduled on the holiday every month changing the place. Every meeting starts at about 13:00 and closes at about 20:00. Every member joins and goes out of the meeting whenever he likes. After training meeting, most of attendants go to pub to drink sake while talking about ideas of robot.

The 47th meeting was scheduled as the 2nd presentation meeting for robot game or competition. About 25 members joined the meeting. Five presentations were carried out. 1) Survival game of robot by Tanaka, 2) Robot Sword Fight by B-saku, 3) Robot competition using balloon by TOBBY, 4) TIROL CHOCO Robot competition by Masayuki, 5) Robot-Billiards by Mr. Ishikawa.

Concerning the survival game of robot, multi-legged robots such as 4 legs, 5 legs, 6 legs and 6 legs with wheel were introduced to the meeting members. 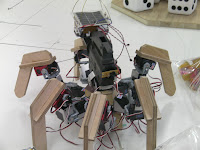 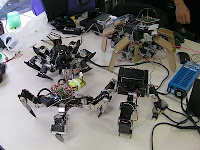 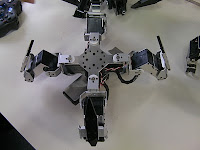 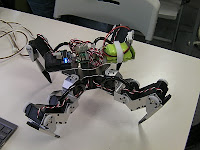 Igga also introduced his new 6-legged robot 'Vanga' with wheel for high speed moving and horn for close combat. Pictures are as follows; 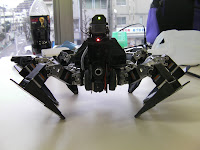 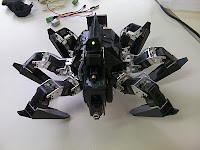 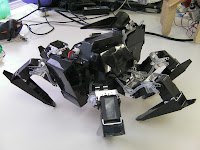 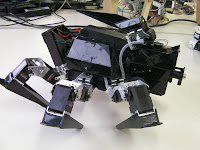 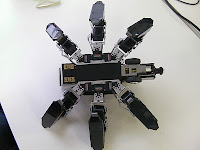 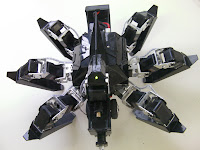 This article was also introduced in Get Robo

Many of the cutting-edge machines on show are eye-popping, but industrial robot "Motoman" also put on a mouth-watering performance, deftly flipping a Japanese savoury pancake called okonomiyaki on a sizzling hotplate.

Swarms of robots that use electromagnetic forces to cling together and assume different shapes are being developed by US researchers.