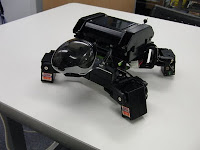 Multi-legged robot has been being miner robot compared with biped robot in Japan. Just G-DOG , a kit of 4 legs robot, was on the market from HIP JAPAN in July 2008. Recently, robot builders who has been making custom-built biped robot are interested in making multi-legged robot.

Shimaken who is a member of Kanto-Gumi Robot Training Meeting, joined `Wonderful Robot Carnival Petit in Soka` with his custom-built robot with 6 legs `Shiguma`on Nov 2, 2008. 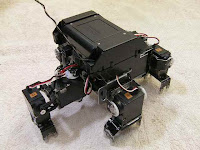 Bishii , (Asakusa-giken) and Tanaka , (Dainihon-giken) declared `the 1st Kanto Robot War` on Dec 4th, 2009. They announced that they began to make multi-legged robots with gun and sensor for detecting the impact, which were controlled using image monitor as`Remo`. The movement of making the multi-legged robot began from this announce.

ROBOSPOT held an information exchange meeting about multi-legged robot on Jan 23rd, 2010. Some robot builders joined the meeting and exchanged the opinion. And the presentation was also carried out. My new robots with 5 legs, BT-L5 and BT-L15 videos were also presented. After the meeting, ROBOSPOT announced a plan of competition with multi-legged robots in this spring. 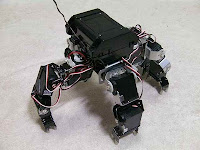 ROBO-ONE announced new regulation of the 17th ROBO-ONE Tournament which holds with under 3 kg robots on March 21st, 2010. The main change of the regulation is arms and body horizontal total length, which is changed from under 340 % to under 240% that of leg. The arm length is not changed under 120 % that of leg. As the result, body wide length is limited compared with former regulation, the new regulation is more strict for robots such as `Cavalia` and `Gargoil` with wide body and parallel linked legs.

ROBO-ONE regulation has been changed in each competition, and changed more and more strictly for robot builders. These strict regulations was made for not to give advantage to the typical structure robot. On the other hand, it seems that these strict changing has been defeating the challenge spirits to a new structure and mechanism of robot builders.

Multi-legged robots competition which ROBOSPOT is in planning will be no regulation except for biped robot not to join and prohibit wheel using. Therefore, many new type of multi-legged robots will be built and builder`s idea will be presented.