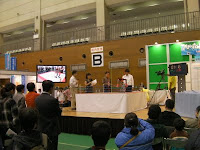 Twenty-one robots joined the contest. The preliminary event was a gymkhana (autocross). There were 3 poles and robots walked the course for 2 minutes. Side walking was prohibited. The order was depended on the number of rounds. It was remarkable regulation that walking in the squatting position was strictly prohibited. It was requested the nee angle always has to keep more than 90 °. This regulation was the first attempt of the competition. Even in the ROBO-ONE, the request was keeping more than 90 °excluding during raising the foot. It was hard regulation for robot builders. 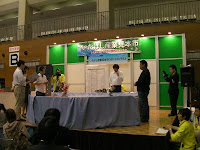 The videos of preliminary event gymkhana were as follows;
Ryuki2


The videoes of the final fight tournament were as follows;
Quarterfinal match: Garoo vs Deshumit, the winner was Garoo.


Quarterfinal match: Ryuki2 vs Phantom, the winner was Ryuki2


Semifinal match: Groo vs Saaga, the winner was Garoo.


For 3rd place match: Saaga vs Ryuki-2, the 3rd place was Saaga