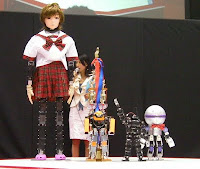 Eight robot groups and 3 special guest robot groups joined the competition. There was no regulation except for biped robot. The dance match carried out by each robot dancing with each ordered song. After dancing, audience took a popular vote and judges also voted. The robot gotten a bigger applause was winner. The winner of the 6th competition got the right of joining the 17th ROBO-ONE tournament on March 21st, 2010.

The most impressed robot was Doka Harumi by Doka Project. The weight was about 15 kg. She danced very smooth and charming as a young girl. The champoion was `RyukiⅡ` by AZM LAB, danced `Joyful`Ikimonogakari. The 2nd place was `BLACK TIGER NEO` by IKETOMU danced `THRILLER` Michael Jackson.

The dancing of entry robot videos were as follows;


The special guest player's dancing videos were as follows;


Dance of BLACK TIGER NEO was also introduced in POPSCI.

I read really much effective material above!