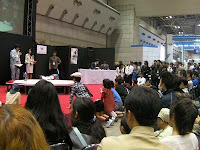 This S.H.R.B. tournament was the second one, the first one was carried out in Kouriyama on Aug. 15th, 2009. As S.H.R.B. was also including `Costume Play` competition of the robot builder, builders were all enjoyed their costume. The details of the 1st S.H.R.B. were described in Robot Watch .

Eleven robots joined the tournament. The most popular character was Gundam. There was no regulation concerning the weight and size of robot, therefore there were some remakable matches with a big diffence of size of robot.

The winner was MS-06S ZakuⅡby Kumama, its character was `Zaku` in Gundam, attached original aluminum cover and moving red eye (You can cerfify in the video). The 2nd place was automo 06 (WAKA) by holypong, attached Gundam cover made from special paper craft. The 3rd place was also Gundam small size, GUNDAM MK-2 MAKO Custom, which body was plastic figure attached special small survo by Mako (You can also cerfify in the video).

The videos of some robot joined the tournament in the stuff room were as follows; these robots were MS-06S ZakuⅡ, D.O.M., S D Layzner, GUNDAM MK-2 MAKO Custom, Meranblue in DeKAHRU.

The videos of the tournament were as follows;