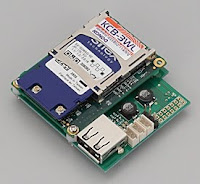 KHR-3HV with KCB-3WL and camera demonstrated to control the robot through the image from the robot on PC. KCB-3WL is also able to control robot autonomously by the image recognition around the robot. It seems to be also useful for such as autonomous robot soccer. The presentation video using KHR-3HV was as follows;

KONDO also introduced a 4-legged robot with KCB-3WL and small camera in the KONDO booth. The robot was custom-built with 8 KRS-2552HVs for 4 legs and RCB-4HV as the main control board. The robot was able to be controlled through the image from the robot on PC. The pictures and video are as follows; 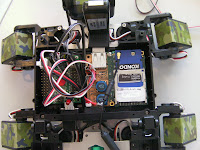 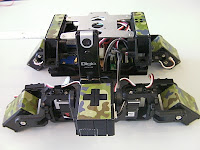 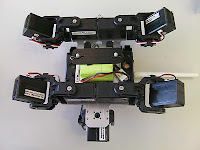 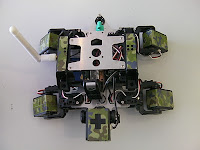 In the 1st Humanoid Helper Project on Aug 17th and Sep 6th 2008, some robot builders used NetTansor of BANDAI for image sensing. Robot builders have been waiting such a small board for image sensing. The same samll sensing system 'Remo' was put on the market on Dec 15th, 2009. It is expected these new small board will be applied to variety of biped or multi-legged hobby robots.

The details were also described in NODE by Moriyama.