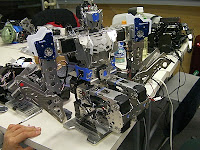 The idea of parallel linkage mechnical structure to apply to hobby robot was opened by Yoshimura, who called as `God of ROBO-ONE` in July 2007. Then it was introduced to ROBO-ONE fight in the Over Regulation Class (ORC) robot, 'Cavalia' by Emanon at first. It was also introduced to Standard Regulation Class (SRC) Robot, ‘Daigakku’ by Akitsuka at ROBO FIGHT 8 (Nov 2~3, 2008). His SRC robot joined the ORC tournament and defeated 'Yogoroza', one of the 4 strong robots called four god machine in Kansai District of Japan, and also defeated 'Automo 03' one of the strong robots in Kyushu District. Of course, the winner of SRC was `Daigakku`. Since the parallel linkage leg has been being popular leg system in the robot fight. Daigakku also attended this tournament, it lost the semi-final match by the winner Fantom. 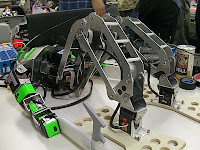 Videos are as follows;

I believe one and all must glance at it.