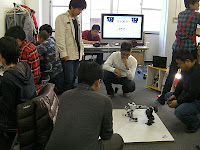 Robot Fight, "The 4th U1K, Under 1 Kg" sponsored by RT Co., Ltd. took place at RT Office in Akihabara, Tokyo on Jan. 9th, 2010. To expand the playing field, RT Co., Ltd. planed an Under 1 Kg biped robot competition. While the ROBO-ONE humanoids have set the standard under 1 kg at the 17th Championship on March 20, 2010. 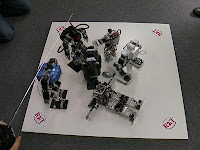 The rule of the game were as follows; Field size: 90 cm square board, robot gotten 3 downs within 3 minutes was winner, robot gone down from the field was loser, robot could not stand up within ten counts was loser.

Joined 14 robots were divided into A and B preliminary leagues. Each league selected upper 2 robots which attend the final league. The final league was carried out with 4 robots. The winner was Soga, custum-built by Igaa. The 2nd place was Dumpy-kai, custom-built by Syousa. The 3rd place was Zaurer-nano, based Robovie-nano by Kenta.

Even in the U1K competition, there was a big difference among robot`s weight, the heaviest robot (YDH2500ban-Shakashaka) was 1 kg and the lightest robot (Koropokkur) was about 500 g. As the special prize for the weakest robot was JO-ZERO original parts, Koropokkur, custom-built by htnk.sp got the prize.

Thanks for your article, quite effective info.