1. Robot body regulation
1) KONDO servos have to be used.
2) There is no limitation of number of axes.
3) Weight of Robot is 3 kg or under.
4) Robot body sizes (arms are folding) are height 30 cm, width 30 cm and depth 30 cm or under.
5) Moving by wheels is prohibited.
6) Control board is free.
7) Robot has to be controlled by wireless or autonomous. Wired control is prohibited.

3. Competition regulation
1) Just one robot walks the course.
2) Time from the start point to goal is recorded.  The shortest time robot is winner.
3) Each robot can challenge the course three times.
4) Robot has to reach the goal within 3 minutes and the time over robot is retired.
5) Robot gone out of the course gets penalty time 10 seconds and one penalty point.  Penalty time adds to the record of 3 minutes.  Robot can restart from the entrance of un-cleared obstacle.  There are no limitations of restart times.  Every restart adds 10 seconds penalty time and one penalty point.
6) At the 2nd attraction, Magic Wall, robot push out the moving wall has a penalty time 10 seconds and one penalty point.  The magic wall push out is not returned to the obstacle course.
7) Robot can get points by pushing the button in each point getting place, where a point button set.  Getting points are depended on the button set place.

Various kinds of 4 obstacles set in the race course were as follows;

The 1st attraction: `Gattan` Seesaw
A big seesaw, which size are 500 mm in width and 700 mm in length with an inclination of 15 degrees.  A point getting push button for one point is set.  The steep slope is not easy for every robot.  It is important for robot not to slip feet.
Degree of Difficulty：★☆☆☆☆

The 2nd attraction: Magic Wall
A road, which size are 600 mm width and 1,000 mm in length with 2 pushing robots.  Magic Walll is hard for light weight robots.  Robot needs weight and power for push out the Wall.  Push button for stopping pushing robot was set on the each pushing robot.  Player robot can stop the pushing robot by pushing the button switch.
Degree of Difficulty：★★☆☆☆

The 3rd attraction: Reverse Street
Belt conveyor street of 500 mm width and 700 mm is moving reverse direction.  Robot has to walk with high speed.  The conveyor is too narrow to walk for big robots.
Degree of Difficulty：★★★★★

The 4th attraction: Swirling Straits
The most difficult Swirling Straits.  Space of 900 mm width and 1,000 mm length, filled with sponge balls is too hard to walk.   Robots need to have long legs.
Degree of Difficulty：★★★★★ 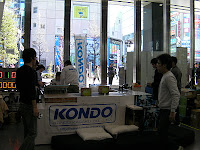 Each robot had three times real time record race.  In the 5th KONDO LAND Obstacle Race, BLACK TIGER L44 could clear all 4 attractions three times within 3 minutes. The 1st place was BLACK TIGER L44 which cleared by the best time at the 1st real time record race with no penalty points.  The 2nd place was Tictac6 cleared all 4 attractions once within 3 minutes.     The result was described here . The best race video of each robot was as follows;

BLACK TIGER L44, 4-legged robot custom-built by IKETOMU could clear three times all attractions within 3 minutes. This video is the 1st race with no penalty points which is the best time of the 5th KONDO LAND.

Tictac6, 6-legged robot using just 3 servos and link system cutom-built by Amino-san. Tictac6 could clear all 4 atractions once within 3 minutes.

Miwaku-no-Takyaku-chan, 4-legged robot custom-built by Takahashi-san.   The robot tried to push the button on the Magic Wall using its long head and stopped  Magic Wall.

Wani-Wani, 4-legged robot custom-built by KENTA-san. The robot also tried to push the button on the Magic Wall and stopped Magic Wall.

Tictac6, custom-built by Amino-san was the most intersting 6-legged robot in the 5th KONDO LAND Robot Obstacle Race. Just 3 servo moters were used in the robot.

Again, great articles, congratulations and thanks! from Bipedolandia Forums and Blog LimoncelloDigital, we follow every day!

So cool and congratulations!