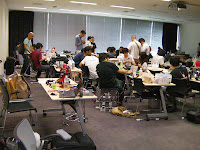 The 1st 9 m Footrace was held in Humanoid Helper Project 3rd on Dec. 26, 2010.  Footraces were also carried out in ROBO-ONE 19th (9m) and 20th (9m) as the preliminary competition for the tournament and details were reported in this blog.