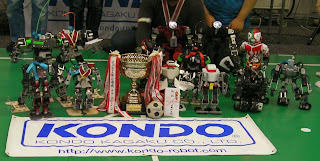 KONDO CUP, Robot Soccer Game started on June 5th, 2006. Almost every 2 month, KONDO Co. Ltd. held the games at ROBOSPOT for two days, on Saturday and Sunday. There are two classes, one is KHR Class which KHR-series robot such as KHR-1, 1HV, 2HV, 3HV can attend KHR Class game. KHR robots changed 4 and less than 4 high-torque servos such as KRS-4013HV, KRS-4014HV, KRS-2350HV also attend KHR Class game. The other class, Open Class which robots using just KONDO servo motor can attend Open Class game and the number of high-torque servo is not limited.

In the 29th Open Class game, the first half was 5 minutes, halftime 1 min and the second half was 5 minutes. One team is consisted with 3 or 4 robots.  Just 3 robots can play soccer in the field. The soccer field of Open Class is larger than that of KHR Class. The regulation of robot body and rules of soccer are described in the KONDO’s web site.

Final game was carried out between the 1st place team (Trinity) and 2nd place team (Speed☆Stars) of the preliminary league.  The winner was Team Speed☆Stars.  Results were described in KONDO's web site.