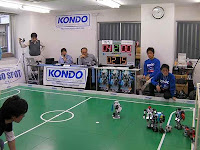 KONDO CUP, Robot Soccer Game started on June 5th, 2006. Almost every 2 month held games. There are two classes, one is KHR class which KHR-series robot such as KHR-1, 2, 3HV can attend the games. KHR robots changed 4 and less than 4 high-torque servos also attend the KHR class game. The other class, open class in which robots using just KONDO servo motor can attend the game and using of number of high-torque servo is not limited. KHR class games will also take place at ROBOSPOT on May 1st, 2010.

Eight teams attended the open class. Eight teams were divided into 2 leagues. A-league teams were SKY, RFC-Bamboo-Bridge, Speed☆Stars and Team-Robotoma. B-league teams were Trinity, Kanto-Branch, SHIBAURA INSTITUTE OF TECHNOLOGY SRDC and Metallic-3-Brothers+α.  Each league had a league game and each the 1st place had a final game.

The 1st place of A-league was Speed☆Stars and B-league was Trinity. Speed☆Stars members were Saaga, Striker and Youhei-5. Trinity team members were Chromkid, Cancer, Sakura-2 and Garu. Chromkid and Garu changed their legs to normal type legs for soccer game. They attended the 17th ROBO-ONE with palallel linked legs. Because palallel linked legs are suitable for robot fight but not suitable for soccer game.

Some videos, A and B-league and the final game are as follows:


Final game 1st half: Speed☆Stars vs Trinity. The winner team was Speed☆Stars


Final game 2nd half: Speed☆Stars vs Trinity. The winner team was Speed☆Stars