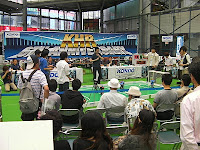 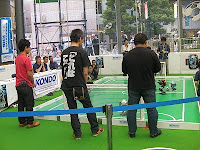 The first half time of the game is 5 minutes, the break time 1 min and the second half is 5 mins. One team is consisted with 3 or four robots.  Just 3 robots can play soccer in the field. The soccer field of open class is larger than that of KHR class. The regulation of robot body and rules of soccer are described in the KONDO’ s web site.

Five teams as Speed☆Stars, SKY, TOKOTOKO&Metallic-3-Brothers, Team Robotoma and Trinity joined the Open Class. Preliminary league game was carried out and final tournament was arranged by the order of league place. The final match, Trinity vs Speed☆Stars was carried out. The winner was Trinity. Sakura-2gou, the goal keeper of Trinity, her play of throwing in was worthy of our attention. The result was described here.


Eight teams joined the KHR Class. Eight teams were divided into 2 leagues. A-league teams were Mistakes, Kanto-Branch, RFC-Bamboo-Bridge and RFC Autumnleaf. B-league teams were The University of Electro-Communications Robomecha-Koubou, Nihon Kogakuin College of Hachioji, Kibougaoka NFC and private team.  Each league had a league game and each the 1st place had a final game. The 1st place of A-league was RFC-Bamboo-Bridge and the B-league was Kibougaoka NFC. The winner of final game was Kibougaoka NFC. The result was described here.