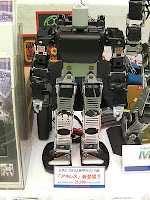 CRAFT HOUSE introduced and announced at the 6th KHR Anniversary on June 5-6th, 2010 that `Achilles`, a New Parallel-Linked Leg set will be put on the market in the end of June, 2010. Achilles is leg set just for KRS-2552HV servo by KONDO CO., LTD. KRS-2552HV is new servo with high torque developed for KHR-3HV. The new leg set is consisted of just parts, excluded servo and control board.

CRAFT HOUSE has been putting Mercury, a parallel-linked leg set for KRS-4000 series servo by KONDO on the market since January, 2009. Mercury is highly regarded by robot builder. 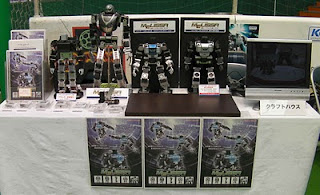 Feature of Achilles are as follows
1) Achilles is leg parts set using parallel-linked mechanism for KRS-2500 Series servo produced by KONDO CO., LTD.
2) The parallel-linked mechanism of Achilles makes robot body move with stability.
3) Changeable leg size depended on the custom-built robot structure
4) Achilles is just leg parts set, so robot builder can make another robot using their surplus servo and parts with the new set.
5) Achilles seems to be suitable for the leg of light class custom-built robots.
6) Achilles also seems to be suitable for the leg of KHR-3HV or YDH2500.
7) Price: 21,000 Yen (excluding tax)

Demonstration of Achilles, New Parallel-Linked Leg attached to KHR-3HV is as follows;

This is sooo cool!!! I was just in Japan and went to the Tsukomo Robot Kingodom. I think I am obsessed!! I want to get a Kondo KHR soo badly now to customize!! Keep up the good blog!!