Competitions were carried out at ASAKUSA ROX3 in Tokyo. The main stage was prepared for the 5th KONDO BATTLE and Multi-Legged Robot Contest. For Autonomous Beach Flag competition, soccer court of the KONDO CUP KHR Class was prepared in the right hand. The scene before opening ceremony on June 5th was as follows.

In the behind seats of main stage on June 5th, participants are preparing and adjusting motion of robots for their competition. Some robots of competitors were as follows: 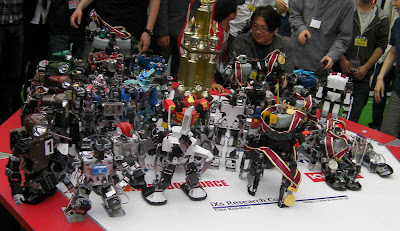 After the 1st day events, party for players and stuffs of KONDO also took place at `WATAMI` a Japanese pub in Asakusa. Attendants exchanged their opinion and information about hobby robots. The details of each competition will be uploaded in another my blog page.