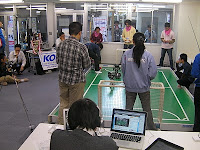 
Final game the 1st half and 2nd half, Kantou-Branch
vs Individual-team 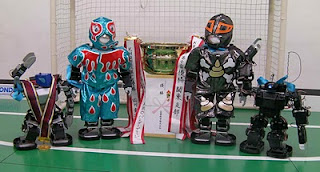 In the interval of the preliminary League, Trial Game of Animal Class took place with 6 robots. KONDO is planning to begin of KONDO CUP Animal Class for multi-legged robots in the next year.

The 1st KONDOLAND Obstacle Race of Multi-Legged Robot will take place at ROBOSPOT in Akihabara, Tokyo on Dec 23, 2010. The competition will be shown on `Ustream KONDO Channel`.

I think every person should glance at this.