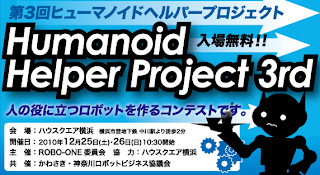 The purpose of HHP is to commercialize useful robot for human through competitions. The 1st competition preliminary took place as ‘Helper Robot Project’ in Kawasaki on Aug 17th and final took place on Sep 6th, 2008.  HHP 2nd took place at Housquare Yokohama on Feb 20-21, 2010.   In the HHP 3rd, Table Robot Class competition took place for the first time on Dec 25. 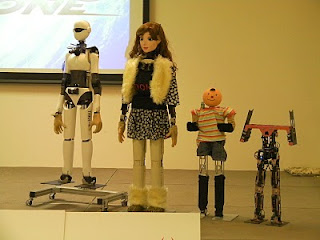 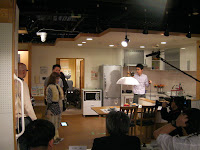 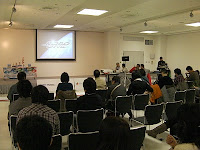 Just 4 robots, such as Chromkid, Aerobattler MON☆, DOKA Harumi and THKR-4.  Robots served the guest in the dinning kitchen.  Robots were remote-controled through camera image on PC in the main hall.

The winner was THKR-4, 2nd place was DOKA Harumi, 3rd place was Chromkid, and Special prize was Aerobattler MON☆. Trail was carried out twice.  Videos of robot serving were as follows;

Aerobattler MON☆ brought a drink and cookie to the guest.

DOKA Harumi shook hands with her guest then opened the refrigerator and tried to bring a drink to the guest.


Preparing for DOKA Harumi by DOKA-san. DOKA-san started to put together on Dec 25th. It took about one day for asembling his robot, Harumi.

Chromkid tried to open the microwave oven and bring a moist hand towel to his guest.


THKR-4 opened the refrigerator, brought a drink to the guest, open the bottle and poured into the glass.  He also set off a cracker for Cheers!  Then he tapped the guest on the shoulders.


The 2nd trial. THKR-4 was controled by master slave system.


ROBO-ONE 9 m Footrace
ROBO-ONE 9 m Footrace took place at Housquare Yokohama, during Humanoid Helper Project 3rd.  The 19th ROBO-ONE tournament (Light Class, Under 3 kg) will take place at Institute of Industrial Promotion Kawasaki Hall in Kawasaki on March 19-20, 2011.  Winner robot of the 9 m footrace got the right to attend the 19th ROBO-ONE without preliminary competition. The 19th ROBO-ONE is held as the tournament with 32 robots which are winners of the local robot competitions and upper place robots in the preliminary competition, 9 m footrace on March 19th. 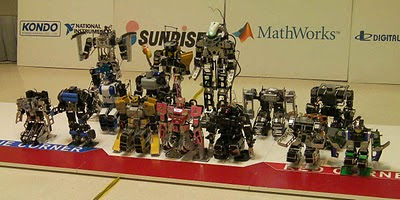 Fifteen robots joined the competition. Each robots tried just once time race. Therefore, some robots ran out of the course including Frosty, which seemed to be the fastest robot. Eight robots could reach the goal. The winner was Deshumit. It took 15.30 seconds. The 2nd place was Dyuminus, 21.46 seconds . The 3rd place was BLACK TIGER NEO, my custum-built robot, 25.38 seconds.  Deshumit got the right to attend the 19th ROBO-ONE tournament. It seems that the borderline time of passing the preliminary competition, 9 m footrace on March 19th is 20 seconds. Videos of the footrace were as follows;


Neutrino1, course out in the last goal point


Frosty was seemed to be winner of the race. It is well known to backflip robot with unique parallel-linked legs. The real record trial was course out. Frosty could reach the goal in a short time (it seemed to be shorter than 10 seconds by the video), in the 2nd trial which was carried out after real record trial. Video was taken by andonoblog-san.


This is the last blog in 2010.  Thank you for visiting my blog written by poor English.  I wish you a Happy New Year!

Tons of info! Thanks!