The prototype of `Mercury` was used for Super Digger Ⅱ produced by Hironochi. Super Digger Ⅱ became the winner of the 1st JSRC (Japan Standard Regulation Community) Championship on Jan. 11, 2009 in Osaka. Mercury was developed by Kyushu Robot Group for Standard Regulation Class robot against 'Daigakku' which was the winner of standard regulation class and the third place of open class in the 8th Robofights on Nov. 2 and 3, 2008, also has parallel-link leg mechanism.

It was proved that the parallel link mechanism of leg is suitable for Standard Regulation Class (SRC) which is limited number of high torque servo as five and also for open class robot.
投稿者 IKETOMU 時刻: 11:31 PM 1 comment:

Robot competition, "U1K, Under 1 Kg“ sponsored by RT Co., Ltd. was carried out at RT Office in Akihabara, Tokyo on Jan. 18th, 2009. While the ROBO-ONE humanoids have set the standard for 2 kg at the 15th Championship on May 4th, 2009. Some hobbyist just don’t have the space, resources, or budget to get actively into building large robots. To expand the playing field, RT Co., Ltd. planed an under 1 kg biped robot competition. The regulation of biped robot body are as follows;
Weight: under 1 kg, Height: under 60 cm, Total axis: more than 15 ( arm with 6 servos, foot with 8 servos ), Sole size of foot: under 12 cm, Max wide length: under 60 cm, Robot control: wire, radio, IR control or autonomous. 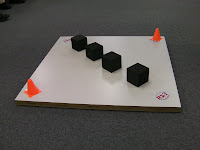 The rule of the game `Pylon Attack` are follows; Field Size: 90 cm square, located 4 cubes along the center line. Robot puts off the rival’s pylon out of the field is winner. Robot gone down from the field is loser. Robots could attack each other and knocking down is not related to winning or losing of the game.

The winner was Demo-5(UEMURA), G-ROBOT. G-ROBOT was marketed on March 2007 by HPI JAPAN. Its weight ( 900 g ) and movement activity are just suitable for U1k. The second place was Soga (IGAA), original robot developed for battle using small size servo by Mr. Igaa who developed Saga. In the i-SOBOT competition, KENTA-ki (KENTA) was winner.


The video are as follows:
Semifinal match 1


For other videos of the competition, click here.
投稿者 IKETOMU 時刻: 8:48 PM No comments:

Forty robots joined the competition. Four type games, 2m foot race, pushing or pulling basket with bottles, Dice soccer and getting cubs (team game) were carried out. Robots got points from each game. In the case of team game, winner team robots got points. 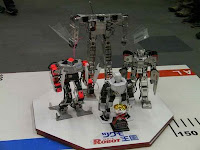 The competition stared at 11:30 am. The winner was Sarga (Igaa). The 2nd place was Garu (Kumama), the 3rd place was WhiteDowarf (Emanon). The winner, Sarga got the right to join the 15th ROBO-ONE Light Class Championship in Kawasaki on May 4th, 2009. 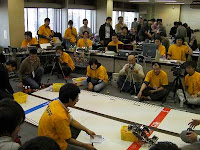