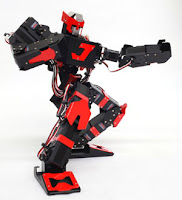 JO-ZERO Typ-2 also can be changed to ROBO-XERO by changing with additional hand unit, which is the same unit used in ROBO-XERO. The hand unit will be put on the market soon.

JO-ZERO was put on the market in July 2009. JO-ZERO has been developed for a biped robot kit with 3 purposes, `Cool`, `Speed` and `Human-like` by Nakamura-san, President of Himeji Softworks. The details were described in this blog.

ROBO XERO is based JO-ZERO. Servo motors `RS306MD` of Futaba Corporation are used for the robot with 24 axes. The weight is 900 g and height is 300 mm. The robot is suitable for the U1K (Under 1 kg) robot fight competition. The details were also described in this blog.

RoboTimes reported JO-ZERO Type-2 Option Unit ‘Sword’ and ‘JO-GUN’ with pictures and videos on Oct 3, 2011 (in Japasese). These units are now developing.

‘Sword’ unit is handled by the option hand unit with 5 fingers which is on the market. Robot can draw the sword from the holder in left shoulder. Video of using Sword Unit is as follows;

‘JO-GUN’ unit is attached right forearm and can shot 6 ring-shaped bullets which are loading in the holder, using the elastic band. Video of using JO-GUN Unit is as follows;

RoboGames is the olympics of robots from around the world to compete in over 50 different events such as combat robots, fire-fighters, LEGO bots, hockey bots, walking humanoids, soccer bots, sumo bots, and even androids that do kung-fu. Some robots are autonomous, some are remote controlled. As an open event, anyone can join. 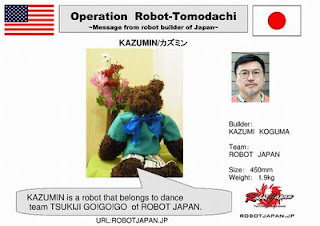 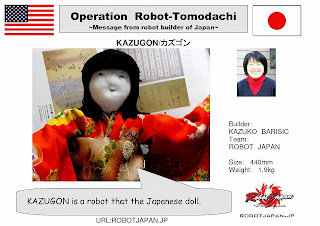 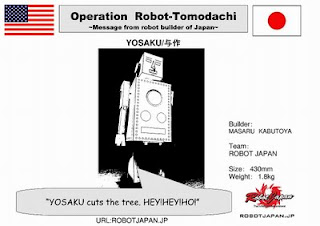 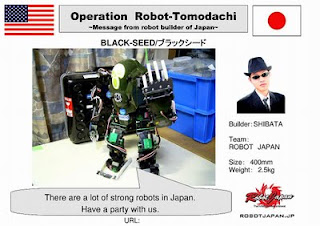 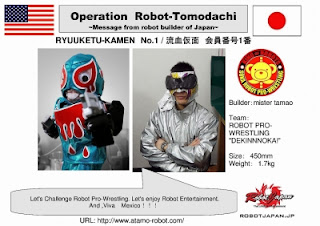 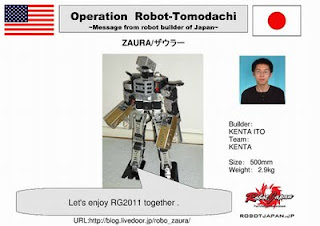 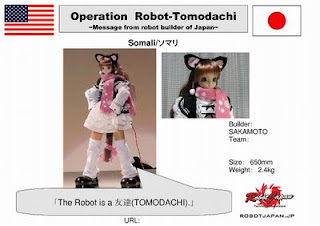 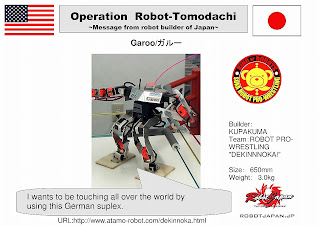 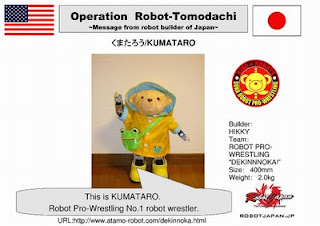 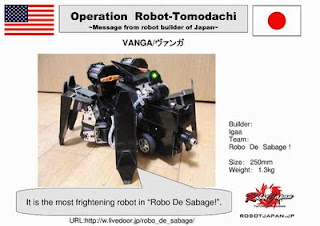 
Multi-legged robot, Arnold Stallone and Vanga also joined WechWars. Two robots had a demontration game in the WechWars field. Arnold Stallone was controled through web far from Japan in the site of the 6th Robot Survival Game at Daonihongiken Office. Videos were as follows;

Arnold Stalone in the backstage


Vanga in the MechWars field


Demonstration of Robot Survival Game by Arnold Stallone and Vanga 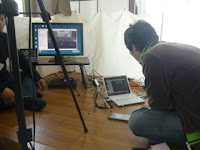 Before the 6th Robot Survival Game, it was tried to control Robot Japan Team's Robot in the field of RoboGames 2011 Mech Warfare far from Japan. Demonstraion of Robot Survaival Game between `Anold Stallone` and `Vanga` was carried out. Nobarizaka-san could controled his robot, `Arnold Stallone` far from the site of 6th Robor Survival Game, Dainihongiken Office in Japan, but there were about 10 seconds lag time. Details of controling the robot from Japan were described in Osaru-kun's Blog (in Japanese with picuture) and Sanzai-san's Blog (in Japanese). Video of the demonstraion was as follows;

Gonz team robots were  `Denryu’ with 8 wheels mobile custom-built by Gonz-san, `Yabusame`, 4-legged robot custom-built by Mota-san and  'Gunroller-kai', mobile with wheel based Gunroller on the market by Tanaka-san.

The 6th Games were shown on `USTREAM robo de savage` from 13:00 to 17:00 (JST) by Ishikawa-san and TOBBY-san. The 6th Games videos are keeping in the Channel.  Five Games were carried out using Camera System.  Robot control was done with the image on PC from the camera attached on the robot.

The 2nd Game, Fortress Battle: New game, a kind of Flag Fight
Each team builds fortress in each territory closed by drawn curtain. Each team fights to shoot down flag in the enemy territory. The winner is the team shot down the enemy flag within 5 minutes or the team which has larger number of survival robot after 5 minutes in the case of each flag does not shoot down within 5 minutes. Result: Each team could not shoot down enemy flag within 5 minutes. Igaa team's survival robot were two (BLACK TIGER L45 and Butank) and Gonz team one (Gunroller-kai). Igga team won the game.

The 5th Game, Rumble Battle.
Five robot joined except for BLACK TIGER L45 which was retired by laser aming system trouble. The winner was Danga by Igga-san. 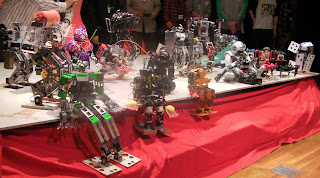 Robot Dance Class
Every kind robot, biped robot and except for biped robot, such as multi-legged robot also can join this class.
Robot plays dancing within 2 minutes with the music requested through radio control or autonomus.
Judgement is carried out by 3 judges and 1st to 3rd place are decided.
Dance stage is 3600 mm×1800 mm.

Robot Dance Class
Every kind robot, biped robot and except for biped robot, such as multi-legged robot also can join this class.
Robot plays dancing within 2 minutes with the music requested through radio control or autonomus.
Judgement is carried out by 3 judges and 1st to 3rd place are decided.
Dance stage is 3600mm×1800mm.

Flyweight division final match was Osaru4goukai vs Ryuketsu-kamen Yellow. The winner was Osaru4goukai, custum-built robot by Osaru-kun who was a 1st-year student of junior high school.

Robot Short Performance Contest
Five robots joined the contest. The winner was BLACK TIGER NEO and the 2nd place was V-Bot, the 3rd place was Saikoro-Great.

(2)V-Bot by Team Veltrobot. LEGO robot car goes up and down the stairs. The 2nd place.


(4)Saikoro-Great by Garu. Dice(Robot) transforms into robot. The 3rd place.

KONDO KAGAKU CO. LTD. announced that KMR-M6, a new 6-legged robot will be put on the market in early May, 2011． The new robot is the second one of the KONDO ANIMAL ROBOT Series.

KONDO uploaded the manual and sample motions of KMR-M6.

KONDO is the leading company of biped hobby robot and is well known to a maker of KHR-series robot as KHR-1, KHR-2HV and KHR-3HV.  The first new category multi-legged robot, turtle type 4-legged robot has been put on the market.

Multi-legged robot has been being miner robot compared with biped robot in Japan. Just G-DOG , a kit of 4-legged robot, was on the market from HIP JAPAN in July 2008.   Recently, robot builders who has been making custom-built biped robot are interested in making multi-legged robot.   Five times of Robot Survival Game with multi-legged robots were carried out in Tokyo.  The first one took place on July 19th, 2010 and the 6th one will take place at Dainihongiken office on April 17th, 2011.

Characteristics of the new robot are as follows:

1. The 6-legged robot can move with highly stability. The robot can walk over the hard bumps with tight grips.
2. Light weight robot body was made by synthetic resin parts. Spring inside the leg parts for absorbing shock makes robot move fast.
3. Robot can move freely with limitted number of servos by the linked-leg system and high powered servo, KRS-2552HV which is using in KHR-3HV.
4. Setting battery under the backpack of the robot makes easy battery change.

5. The dummy head can be exchanged with a real servo for moving the head.
6. RCB-4HV, the control board with 10 analog terminals and 10 digital I/Os of KHR-3HV is also used in the robot.
7. HeartToHeart4, software for motion creating makes easy a lot of variety of motions.
8. Powerful Ni-H battery and rapid battery charger are attached the kit.

Lem-san also reported the details of the hexapod with video in his blog.

Craft House made motions for KMR-6M as follows;