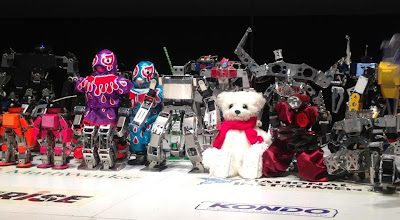 Regulations of ROBO-ONE 23rd
The major regulation was the weight of robot, which was 3 kg or under 3 kg.  Details of the body regulation were same as those of the 22nd except for upper sole size of the foot as 14 cm and side punch was prohibited in the robot fight tournament.

ROBO-ONE 23rd  was held as the tournament with 48 robots upper place robots in the preliminary 4.5 m Footrace including winners of the local robot competitions .

Robots had to walk 4.5 m course with 90 cm width within 1 minute.  In the 23rd,  5 thin rubbers under 1 mm was pasted on the board in the course.   Each robot time record taken 4.5 m walk, or the distance from start point if robot could not walk within 1 minute, or robot fell down from the course was recorded.

Each robot tried just one time Footrace. The 4.5 m course pasted 5 thin rubbers in the course, seemed to be not flat.  Therefore, it was not easy to walk through 4.5 m course for most of robots.    All robots walked the course within 1 minute, passed the preliminary competition.   The result of the preliminary 4.5 m Foot race is here.

4.5 m Footrace Videos
Yamada-san uploaded 4.5 m Footrace videos.  The 1st place was No.28 Metallic Fighter by Team Meta and the record was 11.15 seconds.

Video link list of the ROBO-ONE 23rd and ROBO-ONE Light 8th was uploaded by Ningyou-Tsukai-sann.


Semifinal Matches
Semifinal-1: Laio vs Newtrino-Nero
The winner was Laio.


Final Match: Garoo vs Laio
The final match went into overtime and Laio won in the sudden-death playoff.

Thank you for introducing my video link list page.
Could you change the URL of link to http://ant.mtlab.jp/robo-one/archive/ROBO-ONE_23rd/index.html ?