Robotama.com put ISAMARO as a new robot kit, on the market on April 26, 2010.  The first ISAMARO was using also low price servo, KRS-4024HVS, which torque was 10.5 kg/cm.  Details of the original ISAMARO were reported in this Blog. 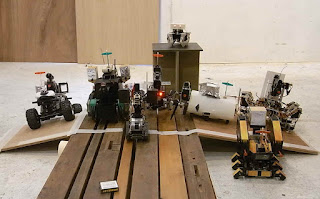 Robot Survival Games such as Extermination Battle, Flag Battle and Battle Royal (Rumble Battle) were carried out in the 14th Robot Survival Game. Noborizaka-san uploaded videos in his YouTube channel.  Details were also described in Sanzai-san's Blog (in Japanese).

Dekinnoka!11 video as Robot Pro-Wrestling was also uploaded by NHKonline. 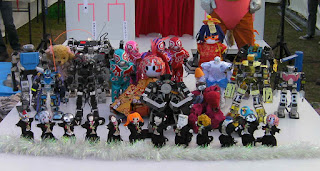 President Mister Tamao of Robot Pro-Wrestling, who is Omata-san planned not only wrestling match but also the back story of each wrestler character such as a real pro-wrestling match. Promotion of Deknnoka!11 have been uploaded. 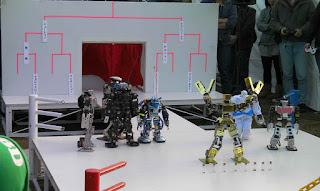 Eight robots joined the tournament were Nagare-Yellow, Yukikaze, Newtrino, Wandahoo, Zerfar, Nagare-BLACKTIGER, Thunderbolt and Nagare-Gold.  Each robot had one Dragon Screw and the winner of each match could get all screws. Fighting rule was as follows; the winner was the robot which dropped out of the ring or knocked down his opponent. The winner of the tournament, robot gotten 8 screws could call Nejiron, God of Screw. Nejiron would answer the winner's request. These storys were similar to those of `Dragon Ball`.