Twenty-six robots joined the competition.  Autonomous 4.5 m footrace  was carried out as the preliminary ROBO-ONE auto 3rd.  Upper 16 rotbots including seeded robot could join the final tournament.  Just 12 robots could arrive at the goal within 1 minute.   The 1st place of the autonomous footrace was KOBIS in 10.40 seconds, the 2nd place was Metallic Fighter in 12.04 seconds and the 3rd place was RP.KIM, DONGHYEON in 17.01 seconds.  Autonomous 4.5 footrace video is here.

The tournament winner was  HAM SIHOON custom-built by YELLOWTOOTH, the 2nd place was  King Puni by Osaka Sangyo University Puni, the 3rd place was HAM JIYUN by BLUETOOTH and the 4th place was HYUN MOORIM by REDTOOTH.   Result of the tournament is here.

Otsuka-san uploaded videos of the 3rd ROBO-ONE auto to his YouTube Channel as follows;

The 1st Round: King Puni vs HKOBIS
The winner was King Puni.

The major regulation was the weight of robot, which was 3 kg or under 3 kg.  Details of the body regulation were described in the 31st ROBO-ONE, the 15th ROBO-ONE Light Regulation and the 2nd ROBO-ONE auto (in English).   Side punch has been prohibited since ROBO-ONE 23rd Tournament in the robot fight.

One hundred and thirty-eight robots joined the competition.  ROBO-ONE 31st was held as the tournament with 48 robots, upper place robots in the preliminary 4.5 m Footrace including winners of the local robot competitions or honor robots.

4.5 m Footrace
Four meters and 50 cm Footrace was carried out as the preliminary competition to select 41 robots and to decide the tournament order.  Robots had to walk 4.5 m course with 90 cm width within 1 minute.   Each robot time record taken 4.5 m walk, or the distance from start point if robot could not walk within 1 minute, or robot fell down from the course was recorded.

Each robot tried just one time Footrace. The 4.5 m course pasted with thin rubbers in the course, seemed to be not flat.  Therefore, it was not easy to walk through 4.5 m course for the most of robots.    All robots walked the course within 1 minute, passed the preliminary competition.   The result of the preliminary 4.5 m Footrace is here.

The final tournament winner was Vermilion by SHIBAURA INSTITUTE OF TECHNOLOGY SRDC.  The 2nd place was Speranza by Tateno.  The 3rd place was BJ05 ASURA by Daidou University Old Boy.  The forth place was KOBIS by BISKO.  Result of the tournament is here.
Sanzai-san also reported the tournament in his blog (in Japanese).

Semifinal, 1st Game: Vermilion vs KOBIS
The winner was Vermilion . 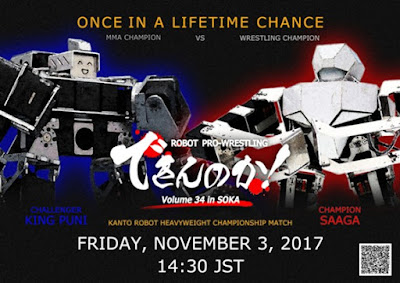 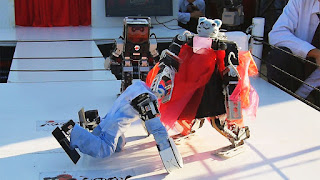 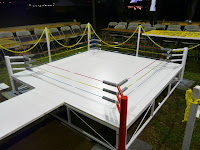 Eighty-six robots joined the 15th tournament. More than 45 robots were custom-built robot, UK1 (1kg or under). Other robots were officially recognized robots such as KHR-3HV.

Twenty-five robots joined the competition.  The tournament winner was King Puni custom-built by Osaka Sangyo University Puni.  The 2nd place was BLACK TIGER NEO by myself, IKETOMU.   The 3rd place was KOBIS by BISKO.  Result of the tournament is here.

Otsuka-san uploaded videos of the 2nd ROBO-ONE auto to his YouTube Channel as follows;