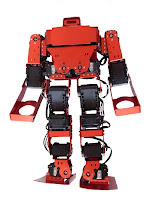 TINYWAVE, champion Robot of ROBO-ONE Light 1st put on the market in Japan on March 26, 2010. The robot is not a kit but just a constructed product.

Sixty-two robots entered in the tournament, including 20 robots from the Republic of Korea. Six custom-built robots joined and others were officially recognized ones. The best 8 robots were all kit robots such as 4 KHR-3HVs, 2 Bioloids and 2 TINYWAVEs. The winner was fruit (TINYWAVE).


TINYWAVE was developed by Jeon chang-hoon, Chamipon of ROBO-ONE KOREA and Tomio Sugiura, famous for robot builder of ROBO-ONE GP Robot, Dynamyzer. The constructed products are made from SUGIURA MACHINE DESIGN OFFICE.

The major regulation in the 17th ROBO-ONE was the weight of robot, which was 3 kg or under 3 kg. Robot had to fight by just punching in the 1st stage of the tournament. Then roots had to fight by just throwing as Judo or wrestling in the 2nd stage and also had to use each different throwing pattern. From the 3rd stage ( quarterfinal match ) to final match, robots could fight punching and/or throwing.

The main change of body regulation was arms and body horizontal total length, which is changed from under 340 % to under 240% that of leg. The arm length is not changed under 120 % that of leg. As the result of new body regulation, there was a remarkable changing of leg structure of robot joined. A lot of joined robots used "parallel linked legs" which use frames that look like 2 parallelograms, one on top of the other. The merit of this structure is that it allows the robot builders to make larger robots that are not as heavy and that are more stable. That's because the builders want longer arms on their robots which can only be rule has been changed so that the distance between the tip of the left and right arms when open must not exceed 240% of the length of the legs (used to be 340%), the builders are eying to make taller robots without adding the weight.

The winner was Super Dygar Ⅱ by Hironochi, who also got a prize of one million yen. Super Dygar's palallel linked legs was used 'Murcury' which was developed by holypong and Kyushu Trainning Meeting members.

The second place was Neutrino by Hida-Kamioka High School. It was first time that high school students got the 2nd place in the ROBO-ONE tournament. The 3rd place was Garoo by Kumama. As the result, winner, 2nd and 3rd place robots were all custom-built with "parallel linked legs".

The tournament videos are as follows;


Semifinal match: Stromwaves Light 2 vs Neutrino
The winner was Neutrino.


Final match: Super DygarⅡ vs Neutrino
The champion was Super Dygar Ⅱ and the 2nd place was Neutrino

The details were also described Sanzai's Blog and Game Watch by Moriyama.

The weight of officially recognized robot such as KHR-3HV is about 1.5 kg. Therefore, custom-built robots handicapped by about 500 g compared with officially recognized ones. It is interesting that how builder of custom robot 1 kg or under overcomes the weight handicap and which robot kit is able to win the tournament. However, it is necessary for getting championship of robot fight tournament to carry 3 important factors such as good body, good motion and good control.

Sixty-two robots entered in the tournament, including 20 robots from the Republic of Korea. Six Custom-built robots joined and others were officially recognized ones.

The best 16 robots were 5 KHR-3HVs, 5 TINYWAVEs, 4 Bioloids, one JO-ZERO and one UK1 (Alumin). In the 3rd stage, custum-built robot under 1 kg was just Alumin. It seemed the weight of more than 500 g was hard handicap for robot builders. However the most remakable robot of the tournament was MK-09 by maco as follows. It's very cool custum-built robot under 1 kg, however it lost the match in the 1st stage.


The best 8 robots were all kit robots such as 4 KHR-3HVs, 2 Bioloids and 2 TINYWAVEs. KHR-3HV is using KRS-2552HV which has high torque, and Bioloid is the most heavy weight robot about 1.8 kg.

The winner was fruit (TINYWAVE) by fruit from Korea, the 2nd place was Banboo (KHR-3HV) by Minoru Outsuka, who is famous for robot writer, the 3 rd place was Dolyang (Bioloid) by Do-lyang Kim from Korea. These three robots got the right to attend the 17th ROBO-ONE tournament which will take place at the same place next day on March 21st, 2010.

The video were as follows;

The details are also described in Sanzai Blog and Game Watch by Moriyama.