Asakusagiken put Remo Humanoid Kit/P ( Remo ) , a new humanoid robot kit on the market on Dec 15th, 2009. The kit is suitable for expert robot builders. The characteristics of the new kit are as follows:

(2)Radio control by Bluetooth
The main board of Remo has BluetoothVer2.0+EDR（BT）function which communicates to PC by 460.8kbps. A cheap USB type BT module can be used as the PC side BT module.

(3)Programming on PC
As the program is made on PC, there are some good points compared with writing program on the micro computer in the robot as follows;
1) It is possible to make long program without limited memory size.
2) High speed and complicated program such as image processing can be moved.
3) There are a lot of texts such as VisualStudio.

(5)Foot sole sensor
Foot sole sensor is developing for the robot kit. The sensor measuring the changes on the foot sole weight balance will make the balance control of the robot. 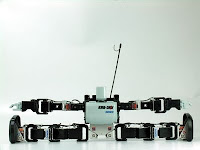 KONDO KAGAKU CO. LTD. will put a new flame set for wide moving KHR-3HV legs on the market on Dec 22nd, 2009. The flame set makes the roll axis range of KHR-3HV legs increase to more than 180° by exchanging of the waist parts of KHR-3HV original kit. The new flame is good for making variety of motions such as a keeper motion in the soccer game. 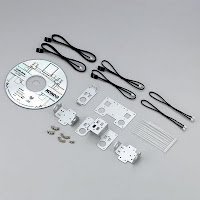 The 1st JSRC ( Japan Standard Class Robot Community ) Championship was carried out in NAGOY MOTOR SHOW at Port Messe Nagoya on Nov. 22nd, 2009. Last year, organization of JSRC was announced by Mr. Iwaki during `Robofight`( Nov 2-3, 2008 ) in Osaka. The presentation was also reported . Then a tentative JSRC Championship was carried out during the 9th Robogong in Osaka on Jan. 11th, 2009.

The ROBO-ONE and almost other robot competitions have just open class and did not divide the class as standard class (kit based class) and open class. There were not standard class except for `Robofight` and `Robogong` produced by Mr. Iwaki. Therefore, the third level robot builders could not win the competition because of the difference of power of the robot. As the standard class includes the third level and the forth level, JSRC is expected to increase the opportunity joining the competition for builders who are remodeling the robot kit or beginner with kit robot. 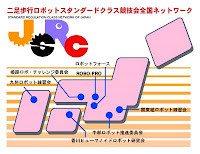 The JSRC regulation * for remodeled or custom-built robots are as follows;
Weight: 1.8 kg or under
Height: 40 cm or under
Sole size: 65 % of the foot or under and 45 % of the foot or under
Hands size: 60 cm or under
Total number of servo: 30 or less 5 or more
Number of servo with torque of 15 kg・cm or more: 5 or under.
Total torque limit is 2200 or under. Calculation is as follows; Total torque = (torque/speed)×｛(voltage of loading battery) ^2 / (catalog voltage of the battery)^2｝× number of servo
Gun or missile can be loaded and used
Turn over angle of robot are 15° to front and rear, and 20°to left and right 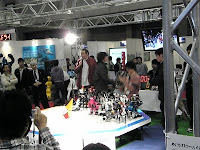 Fifteen Robots of representatives of the groups joined the championship. From July 2009 to November 2009, each representative was decided in the competition which was sponcored above-mentioned group.

The robot and builder got the 1st JSRC championship was SuperdhygarⅡ by Hironocchi. The 2nd place was Robovie-XSF by zero and the 3rd place was Buraster by Akitsuka and XO3 by Ryuuya. Hironochi commented that his robot used `Murcury` as foot and `KRS-2552HV` as upper body servo for the weight 1.8 kg or under with high power.

The detail and videos were uploaded in the 1st JSRC result page. 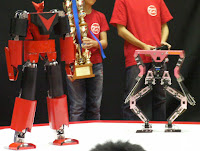