ROBO-ONE 19 was held as the tournament with 48 robots which were winners of the local robot competitions and upper place robots in the preliminary competition, 9 m Footrace.

The winner was Garoo by Kumama-san, who also got a prize of 5 hundreds thousand yen.  The second place was HammerHead by Osaka Sangyo University Robot Project. Hammerhead is well-known as one of Kansai-Shitenno (Kansai Big Four).  The 3rd place was Super-DhygarⅢ by Hironocchi-san, who was the winner of ROBO-ONE 17th (last Light Class, 3 kg or under).  Result of the tournament was here.

Videos of 2nd Stage, 3rd Stage, Quarterfinal, Semifinal, For 3rd Place and Final match were uploaded in IKETOMU Channel.  All matches videoes were also uploaded in SHR009 Channel.   Intersting videos were as follows;


The 2nd Stage 9: G-Saaga vs Chromkid
G-Saaga threw Chromkind with Back-drop and perfectly executed move in the middle of the ring. G-Saaga got two Knock-donwns as a bold (Oh-waza). However the match went into overtime and Saaga lost the match by sudden-death.


Quarterfinal-2: Super Dhyger Ⅲ vs Frosty
Super-Dhygar Ⅲ was defending champion of ROBO-ONE Light Class(3kg or under). Frosty was known to a back-flip robot. The match went into overtime and the winner was Super-Dhygar Ⅲ.


Semifinal Matches
Semifinal-1: HammerHead vs Super-DhygarⅢ
The winner was HammerHead.


Final Match: HammerHead vs Garoo
Before the final match, Garoo had a machine trouble and had to change servo moter. It took about 1 hour. Garoo recovered and got the championship.

Regulations of ROBO-ONE 19th
The major regulation was the weight of robot, which was 3 kg or under 3 kg.  Details of the body regulation were here.   Video of the regulation check by ROBO-ONE Committee was as follows;

Preparing Robots and Warm-Up in the Backstage
In the 4th floor of Institute of Industrial Promotion Kawasaki Hall, robot builders were preparing their robots and warming up for the preliminary competition, 9 m Footrace of ROBO-ONE 19th tournament.  Video was as follows;

ROBO-ONE 19 was held as the tournament with 48 robots which were winners of the local robot competitions and upper place robots in the preliminary competition, 9 m Footrace.

Robots had to walk 9 m course with 90 cm width within 1 minute.   Each robot time record taken 9 m walk,  or the distance from start point if robot could not walk within 1 minute, or robot fell down from the course was recorded.

Each robot tried just one time Footrace. The 9 m course seemed to be not flat in some parts and the center of the course was pasted sponsor advertise label. Therefore, it was not easy to walk through 9 m course for most of robots. Most of  robots ran out of the course including Frosty, which seemed to be the fastest robot. Just 26 robots could reach the goal within 1 minute.

9 m Footrace videos of all robot joined ROBO-ONE 19th were as follows;


The 2nd Place was Balt by Sato-san Chiba Institute of Technology, 17.69 second. 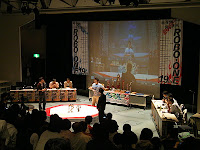 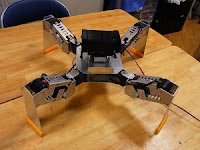 Mercury Leg Set can be divided into two parts. It seems to be easy to use the divided leg part as the leg of 4-legged robot for KONDO KRS-4000 series servo such as KRS-4013HV and KRS-4014HV. The 4-legged structure is similar to that of KMR-P4 which will be put on the market in this month.

Video of the new custom-built robot is as follows;