The games were shown on `USTREAM KONDO-ROBOT Channel` from 1:00 pm to 4:00 pm (JST) and videos are keeping in the Channel.

Results are described here.   All videos of the competition were uploaded to IKETOMU Channel. Interesting videos are as follows;

Student Class Semifinal: Hayabusa vs Tweast
The winner was Tweast.


Student Class Semifinal: Daigakku vs JOKER
The winner was Daigakku.


Open Class Semifinal: Chrom-Kid vs Cavalier
The winner was Chrom-Kid.


Exhibition Class 1st Stage: Garoo vs α NEXT
The winner was Garoo.


Exhibition Class 1st Stage: Frosty vs Gattender
Frosty, well known as a back flip robot, moved by jumping. The winner was Frosty.


Exhibition Class Semifinal: Frosty vs JOKER
The winner was Frosty.


Exhibition Class Final: Garoo vs Frosty
The winner was Garoo. 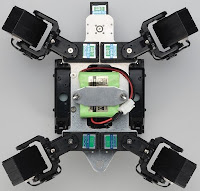 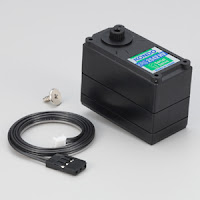 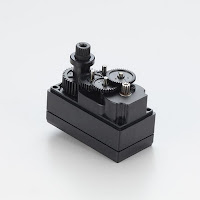 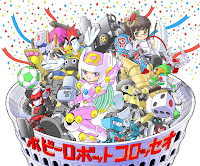 Illustration of the COLOSSEO was designed by Minoru Kamiya, who is famous for manga such as Pla-Wres Sanshiro and Act-on and also known to designer of Weekly ROBO XERO. Kamiya-san also will join the COLOSSEO with his custom-built robot.

All competitions in the COLOSSEO will be shown on ‘Ustream HOBBY ROBOT COLOSSEO’  by Ishikawa-san and Tobby-san.

Program for 2 days (JST) is as follows;

All competitions scheduled were shown on ‘Ustream HOBBY ROBOT COLOSSEO’ and videos were keeping in the channel. The COLOSSEO also was reported in robot builders blogs (the 1st day and 2nd day).  The details of the COLOSSEO were also reported in MYCOMJOURNAL blog with pictures (in Japanese).

Introdution of Each Robot Game of Group

Naga-Ranger Fighting Festa（ROBOT Karuta）
Nishiokitama Industry Association holds the Naga-Ranger Fighting Festa twice every year in Nagai City, Yamagata Prefecture. In the competition, “ROBOT Karuta: Card Finding Game” is carried out for pairing the 1st stage fighting at first. Speaker reads a card which card marked by the first letter of the card content. When a card is read, robot owner finds the card and then makes his robot run to the card and put on the card. Then, the robot owner can select the position of the robot fight tournament. Video, taken on the 5th Nagaranger Fighting Festa is as follows;

Sunrise Hero Robot Battle
Sunrise Hero Robot Battle(S.H.R.B.) is a robot fight tournament sponsored by ROBO-ONE Entertainment Office and LOXLEY Co. Ltd. and also supported by SUNRISE Inc. which is famous for animation producing company such as `Gundum`. The first S.H.R.B was carried out in Kouriyama on Aug. 15th, 2009. As S.H.R.B. is not only robot fight tournament but also including `Costume Play` competition of the robot builder, builders are all enjoying their costume. The regulations are 1)Character of the robot is limited to those of cartoon characters produced by SUNRISE Inc. 2)Robot worked as a biped robot. 3)Pilot also had to have or put on the item concerning character of the robot. Video taken at the 2nd S.H.R.B. during INTERNATIONAL ROBOT EXHIBITION 2009 in TOKYO BIG SIGHT on Nov. 28th, 2009 is as follows;

Bottle Traction :
Robot pushes or pulls a basket with 500 or 1000 ml bottles for 2 m within 1 minute. Points are multiplication of number of bottles and distance carried. Video taken at the 7th Carnival on July 19, 2009 is as follows;

TIROL-CHOCO Robot Competition (CHOCO Getter: TIROL-CHOCO Carrying Race)
The 1st TIROL-CHOCO Robot Competition sponsored by MASAYUKI-san, supported by RT Co., Ltd. and cooperated by TIROL-CHOCO CO., took place at RT Office in Akihabara, Tokyo on July 9, 2007. After that, the completion takes place every year. Regulations of robot body are 1) Robot has to put on big TIROL-CHOCO exterior, 2) Biped robot which number of servo for legs is under 4. Such type robots are known to Roppo type robot. Two arm-robots put on the 2 m course. Player removes TIROL-CHOCO from the basket of arm-robot to the basket on the robot. Each robot carries TIROL-CHOCO on the robot within 5 minutes for 2 m. The order is depended on the time and the number of TIROL-CHOCO carried. Video taken in the 4th competition on Feb. 13, 2010 is as follows;

Robot Survival Game(Extermination Battle, Flag Battle and Fortress Battle)
Robot Survival Game was planned by Tanaka-san and Bishii-san. Mobile, not only multi-legged robot or biped robot but also mobile with wheel or caterpillar with toy gun and hit sensor can join to play survival game. The 1st Robot Survival Game took place at Akihabara, Tokyo on July 19, 2010 and the game takes place every 2 months. Tanaka-san also planned several kind of survival game, such as Extermination Battle, Flag Battle and Fortress Battle. Videos taken at the 7th Robot survival Game on June 26, 2011 are as follows;

ROBO-SOCCER
ROBO-SOCCER is sponsored by NPO Hamamatsu Monodukuri Koubo. The 1st ROBO SOCCER took place on Dec. 5, 2009 and the 2nd one took place on July 24 in Shizuoka City. The robot body regulation and game rule are similar to those of KONDO CUP. Two remarkable differences from KONDO CUP are 4 robots play soccer on the joint-carpet field. Video was taken at ROBO SOCCER 2010.

Build up Himeji Castle:
Robot carries three kinds of cube or polyhedron on the 1.5 m wood board, 30 cm width by kicking, hitting or handling into the goal area within 2 minutes. Video taken at the 10th competition on July 18, 2010 is as follows;

UK1: Under 1 kg Battle:
Robots are classified into 3 class such as SRC (Standard Regulation) Class(Under 3 kg), ORC (Over Regulation) Class (Under 2 kg) and UK1 (Under 1 kg) Class in the YOKA ROBO Battle Tournament.
Video taken in YOKA ROBO Matsuri 20 on May 22, 2011 is as follows;

Robot Pro-Wrestling Dekinnoka!8
`Dekinnoka!` in Japanese, means `Can you do it?`. As Omata-san has been loving real professional wrestling, the 1st Robot Professional Wrestling in Soka on Nov. 3rd, 2008 was planned and held by him. He explains the 'Robot Professional Wrestling' is not 'Wrestling' but 'Fighting Arts'. The purpose of `Dekinnoka!` is not only robot fight but also to inform pleasure of robot. Press Coference Video of Dekinnoka!8 and Promotion Video of Robot Pro-Wrestling "Dekinnoka!" (Ver. 2011) are as follows;

ROBOT FORCE:SWORD7
ROBOT FORCE has been holding ROBO-Fight and ROBO-Gong, robot fight competitions for biped hobby robot since 2005. The 1st ROBO-Gong took place for KHR-1 user on Apr 3, 2005 and the 1st ROBO-Fight for custom robot builder on May 8, 2005. Each competition takes place twice every year. SWORD7, robot athletic competition took place on Apr 25, 2009 for the first time. Biped kit robots on the market can join the race. Robot goes through the course set with seven obstacles within 3 minutes. Video of Myanoi taken at HOBBY ROBOT COLOSSEO on Sep 3-4, 2011 was as follows;

RoboCountryIV: Robot Amusing Contest (Robot Performance Contest)
RoboCountryIV (RCⅣ) is the society of the biped robot builders mainly from Shikoku Island of Japan. The RCⅣ is the Robot competition which has been promoted by Kagawa Humanoid Robot Society "KHRS" . Their ultimate goal is to enlighten the youth of Kagawa with the brilliant technology of Robotics.The 1st RCⅣ took place in 2005 Aug and then RCⅣtakes place twice in summer and winter every year.
Robot Amusing Contest (Robot Performance Contest) : Presentation of robot ability. Each robot amuses the audience with its performance.

Omata-san also announced, Dekinnoka!9 would be held on Nov. 3 in Soka City, Saitama Prefecture and Dekinnoka!10 on Dec. 25, 2011 at Tsukiji Buddhist Hall, Tokyo.

Promotion Video of Robot Pro-Wrestling, "Dekinnoka!" (Ver. 2011) is as follows;