The Soccer Game of KONDO CUP started on Jun 5, 2006. Almost every 2 month holds games. There are two classes, one is KHR class which KHR-1, 2 and 1HV can attend the games. KHR robots changed 4 and less than 4 high-torque servos also attend the KHR class game. The other class is open class which Robots using just KONDO servo motor can attend the game and using of number of high-torque servo is not limited.
KHR Games were also carried out at RoboSpot in Akihabara on Feb. 15th, 2009.

Seven teams attended the open class. Teams were divided 2 leagues. A-league teams are MANOI-Dan, Trinity, Team-Nicikoudai and Individual member team. B-league teams are Shisenkai, RFC-Bamboo-Bridge, SKY and Nagaranger Kantou-baranch. Each league has a league game and each winner had a final game. 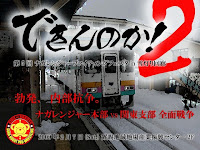 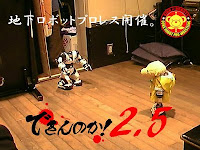 The 5th Nagaranger Fighting Festa in The way of the snow lantern (Feb 7, 2009)

Robot fight competition, " The 5th Nagaranger Fighting Festa in The way of the snow lantern " sponsored by Nishiokitama Industry Association was carried out at Taspark Hotel in Nagai City, Yamagata Prefecture on Feb. 7th, 2009. Nagai City is in the snow country but this year there was not so much snow as last year. Nishiokitama Industry Association holds the Nagaranger robot fighting Festa two times (in summer and winter) in these years.

Twenty-eight robots joined the competition. At first, “Card Finding Game” was carried out for pairing the 1st stage fighting. Speaker reads a card which card marked by the first letter of the card content. When a card is read, robot owner finds the card and then makes his robot run to the card and put on the card. Then, the robot owner can select the position of the robot fight tournament. The video of the “Card Finding Game” are as follows;

The competition started at 14:40 pm. The winner was Cavalier (Emanon). The 2nd place was Cromkid (Kupapa). Robot fight videos are as follows:


Final Fight: Cavalier vs Cromkid
Cavalier won the final fight by technical knocked out because of the machine trouble of Cromkid.