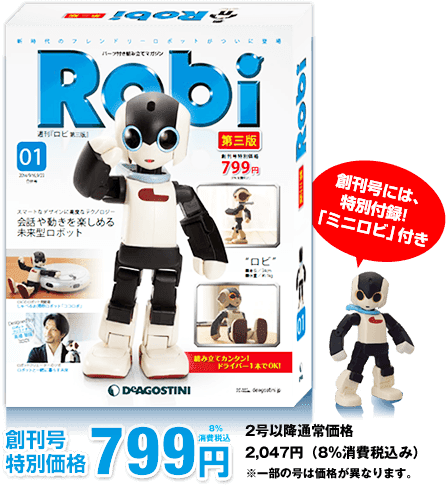 DeAGOSTINI issued weekly magazine, the 3rd edition of `Weekly Robi` with biped robot parts of Robi on Jan 20th, 2015.  Robi parts are attached every weekly magazine.   Robot will complete with 70 volumes of magazine. The first issue price is 799 yen including tax. Price of the 2nd issue will be 2047 yen excluding tax.

DeAGOSTINI took place  a Dance Perfomance Show `100Robi` for a memorial day of the 3rd edtion issue on Jan. 20th. One hundred robots `Robi` were dancing as follows.


Gingmag also introduced the issue of `Weekly Robi` in English.


DeAGOSTINI  issued weekly magazine, `Weekly Robi` with biped robot parts of Robi the preliminary edition on Oct 30th, 2012, the 1st edition on Feb 19th, 2013 and the 2nd edition on Feb 25th, 2014.  DeAGOSTINI also issued weekly magazine, `Weekly ROBO XERO` with robot parts of ROBO XERO on Feb 8th, 2011.  Robot has completed with 70 volumes of magazine on June, 2012 and the details were described in this blog.

What is the difference between 1st, 2nd and 3rd editions?