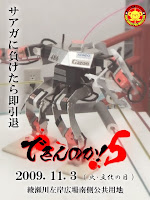 For 'Robot Professional Wrestling Match, the ring surrounded by 3 ropes with red and blue corner like a real 'Professional Wrestling` was prepared. He carried out 7 times `Deinnnoka` during one year. `Deknnoka` has been also supported by the members of the Kanto-training gumi(group). The details of `Deknnoka 2` and `Deknnoka 3` were uploaded in this blog. The details and videos of `Dekinnoka 5` are as follows;


The 2nd fight was the Kanto Heavy Weight Tag Championship title match. As former tag champion rsv3 & Sakura-2 return the champion belts, three pair robots fight to get the title of Kanto Heavy Weight Tag Championship. Three pairs are Kumataro & Kumahiko(a bear doll), Kometa & Chokochoko-maru, Phantom & Dhuminus . One of the pair robot fell down of the ring was loser. The winner pair was Phantom & Dhuminus and got the tag champion belts.


The 3rd fight was the main event of Dekinnnoka 5, the Kanto Heavy Weight Championship title match, the champion Saga vs the challenger Garoo. Saga is well-known as its skill of throwing, on the other hand Garoo is well-known as its thrusting punch. Saga won the fight and kept his champion belt.


Videos were also uploaded by Mr. Omata as follows:'Dekinnoka Official Site`. You can watch the details of the Robot Professional Wrestling videos by clicking each 7 poster of `Deinnoka 1, 2, 2.5, 3, 3.5, 4 and 5`.

Congratulations for your blog!
I'm amazed by these robots but, are they self-controlled or is there anyone controlling the robots?