Mr. Nakamura, president of Himeji Soft Works, announced JO-ZERO, a new robot kit, will be put on the market on July 15th, 2009． The presentation was carried out at RT, a robot shop in Akihabara, Tokyo on July 5th , 2009.

Himeji Soft Works is well-known as a robot control board developer, HSWB series and Motion Processor series, and the president Mr. Nakamura is also famous for a robot builder making unique and excellent robots as a transforming robot, HSWR07 and a female type robot, LILIA . 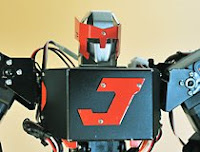 JO-ZERO has been developed for a biped robot kit with 3 purposes, `Cool`, `Speed` and `Human-like`. As for `Cool`, Mr Mitsuru Kamiya, one of the most famous robot comic writers well-known as `Purares-Sanshiro` and `Act ON`, designed the head part of JO-ZERO. He advised not only on the head part but also robot body design, color and naming. These advises made JO-ZERO with cool form and cool color.

As for the 2nd purpose, `Speed`, JO-ZERO is using RS304MD from Futaba Corporation as the actuator which is also used in G-ROBOT GR001 and G-Dog from H.I.P. Japan. The torque of RS403MD is 5kg･cm. It is necessary for rapid moving to make the body weight light. The weight of JO-ZERO is 800 g without battery, and about 860 g with battery which is about half those of KHR-2HV/3HV.

As for the 3rd purpose, `Human-like`, JO-ZERO has 20 axes which make the robot move more human-like than KHR-2HV or KHR-3HV with 17 axes. G-ROBOT GR001 also has 20 axes. However there is a big difference between JO-ZERO and GR001 in the position of axis. JO-ZERO does not have neck and leg roll axes but has hand roll axes and a body pitch axis. These characteristic axis positions make the JO-ZERO movement as `Human-like`.

The battery is using PR-4S780P, which is also used in G-ROBOT GR001 and G-Dog, and is well-known as a safe lithium polymer battery. Price is excluded the battery.

The control board is HSWB-03F, a new one developed for JO-ZERO. The software for HSWB-03F is JOZ Controller which is also newly developed. JOZ has a motion generating function which makes a walking motion of JO-ZERO automatically on PC. As you know, it is the most difficult to make walking motions of biped robot. JOZ Controller makes it easy.

The shipment is scheduled on July 15th, 2009 from Himeji Soft Works or other robot shops. STR-ZERO, the base model, will also put on the market at the same time. STR-ZERO has 17 axes without hand roll axes, a body pitch axis and head part. The weight is about 680g without battery.

I was surprised to see servos with only 5kg/cm torque, however an operating angle of 300 degrees is very nice.