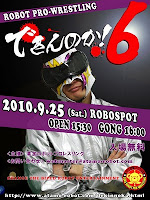 Robot Professional Wrestling Match, `Dekinnoka!6`, sponsored by Omata-san took place at ROBOSPOT in Akihabara, Tokyo on Sep. 25th, 2010.   The matches were shown on `Ustream Dekinnoka Channel` from 4:00 pm to 5:50 pm (JST) and the videos are keeping in the Channel.   The details were also described in Sanzai-san's blog , RoboTimes (1), (2) (in Japanese).

Dekinnoka!6 Opening Ceremony
President Mister Tamao of Robot Pro-wrestling, who is Omata-san planned not only wrestling match but also the back story of each wrestler character such as a real pro-wrestling match. He introduced the details of Dekinnoka!6 at the opening ceremony .

Wrestling Matches were as follows;
1) ROBOT PRO-WRESTLING WORLD TRYOUT: Saaga vs Waroo
For discovering robot pro-wrestling characters, challenger robots against Saaga, Kanto Robot Pro-Wrestling Champion have been invited all of the world.  The robot passed the examination fight against Saaga, will be able to join every Dekinnoka Pro-wrestling match. The winner was Waroo.

3) KONDO TIME-LAG BATTLE ROYAL : with 9 robots joined were KHR-3HV No1, KHR-3HV No2, Karuma, BLACK TIGER 45, Dyuminus, Vanga, Yamate-Line, Ryuketsukamen and Obocchama-kun.  Anyrobot, not only biped robot but also even multi-legged or robot with wheels can join the KONDO TIME-LAG BATTLE ROYAL.  At first two robot fight in the ring, after 3 minutes a additional robot joins the fight, then every 3 minutes another robot joins the fight.   The ring rope of both side are removed for dropping out of ring.  The winner is the robot survied on the ring.

5) Main Event Single Match:Nagaregold vs Thunderbolt
The winner was Nagaregold. 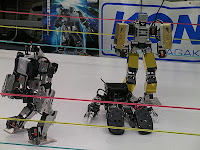