The 3rd KONDO LAND Multi-Legged Robot Obstacle Race took place at ROBOSPOT in Akihabara, Tokyo on May 7, 2011.
Nine multi-legged  robots, such as 4-legged and 6-legged robot joined the race. All multi-legged robots were custom-built robots.

1. Robot body regulation
1) KONDO servos have to be used.
2) There is no limitation of number of axes.
3) Weight of Robot is 3 kg or under.
4) Robot body sizes (arms are folding) are height 30 cm, width 30cm and depth 30 cm or under.
5) Moving by wheels is prohibited.
6) Control board is free.
7) Robot has to be controlled by wireless or autonomous. Wired control is prohibited.

3. Competition regulation
1) Just one robot walks the course.
2) Time from the start point to goal is recorded. The shortest time robot is winner.
3) Each robot can challenge the course twice.
4) Robot has to reach the goal within 3 mins and the time over robot is retired.
5) Robot gone out of the course gets penalty time 10 seconds and one penalty point. Penalty time adds to the record of 3 minutes. Robot can restart the entrance of un-cleared obstacle. There are no limitations of restart times. Every restart adds 10 sec penalty time and one penalty point.
6) At the 2nd attraction, Magic Wall, robot push out the moving wall has a penalty time 10 seconds and one penalty point. The magic wall push out is not returned to the obstacle.
7) Robot can get points by pushing the button in each point getting place, where a point button set. Getting points are depended on the button set place. 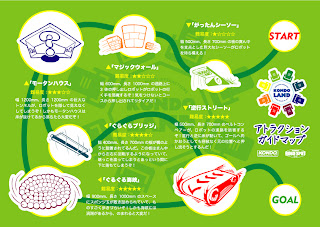 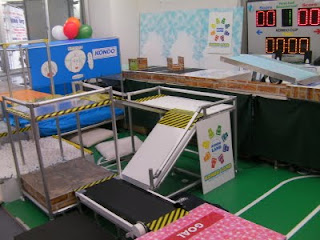 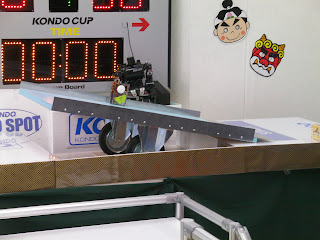 The 2nd attraction: Magic Wall
A road, which size are 600 mm width and 1,000 mm in length with 2 pushing robots.  Magic Walll is hard for light weight robots.  Robot needs weight and power for push out the Wall.  In the 3rd KONDO LAND, push button for stopping pushing robot was set on the each pushing robot. Player robot can stop the pushing robot by pushing the button switch.
Degree of Difficulty：★★☆☆☆ 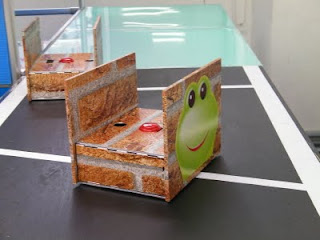 The 3rd Attraction: Mootan House
A big tunnel, which size are 1,200 mm width and 1,200 mm length with a pitfall (400 x 400 mm). Two push buttons for one point are set in the House. Ten point button is set out of the House. One push gets one point and ten times push get 10 points, however 11 times push makes point zero. Robots fallen into the trap, cannot return the race course. Controller cannot see his robot in the Mootan House from controlling space.  Controller can move by the advice of his assistant.  Robot can be attached wireless camera and be controlled through image on PC.
Degree of Difficulty：★★★☆☆ 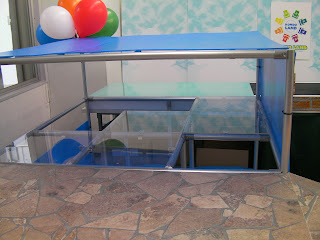 In the 3rd KONDO LAND, robot fallen down under the Mootan House, has to open the gate by pushing button switch set behind the floor in front of Swirling Straits. 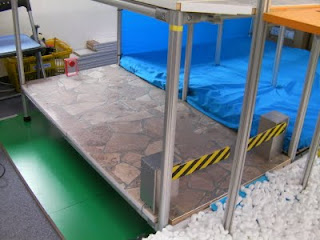 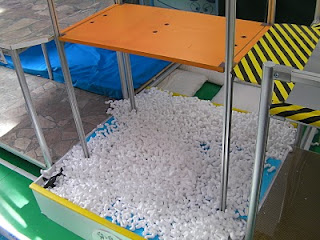 The 6th attraction: Reverse Street
Belt conveyor street of 500 mm width and 700 mm is moving reverse direction. Robot has to walk with high speed.  The conveyor is too narrow to walk for big robots.
Degree of Difficulty：★★★★★ 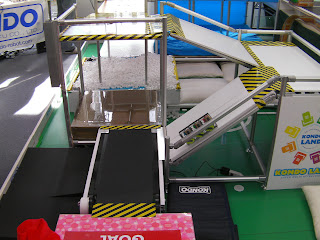 The  3rd KONDO LAND Multi-Legged Robot Obstacle Race Results
The time record races were carried out twice. In the 3rd KONDO Land Obstacle Race, no robots could clear all 6 attractions even Wobbly Bridge within 3 minutes.

Ramble of Multi-Legged Robots
Ramble of multi-legged robot was carried out after competition.

This won't have effect in reality, that's exactly what I think.