The 4th Robot Survival Game took place at ASOBITCITY in Akihabara, Tokyo on Dec 11th, 2010.  Five robot such as 4-legged, 6-legged and mobile joined the game.  Five robots were Arnold Stallone (6-legged robot),  Gunroller-kai (mobile with wheel which was based Gunroller), Osaru-2.5gou (6-legged robot ), Σ (Shiguma, 6-legged robot) and Yabusame (4-legged robot).  BLACK TIGER L45 did not join because I was too busy to prepare my robot. 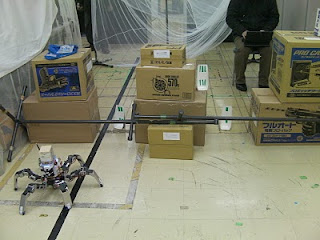 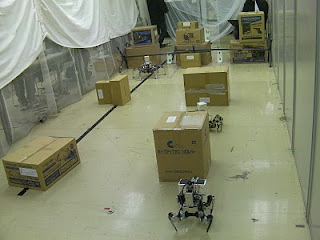 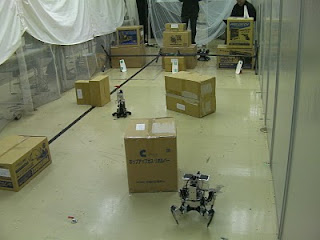 Castle Attack Game. Keeper robot was Shiguma and keeping out of the castle. Attacker robots were Yabusame, Gunroller-kai and Osaru-2.5gou.


Castle Attack Game. Keeper robot was Arnold Stallone and keeping in the castle. Attacker robots were Yabusame, Gunroller-kai and Osaru-2.5gou.


Castle Attack Game. Keeper robot was Yabusame and keeping out of the castle. Attacker robots were Shiguma and Osaru-2.5gou.


Castle Attack Game. Keeper robot was Osaru-2.5gou and keeping in the castle. Attacker robots were Shiguma, Yabusame and Arnold Stallone.


The details were also described in Sanzai-san's blog, Osaru's blog and Tanaka-san's blog (in Japanese).

I love your site, It is a pleasure to visit.

I have added your site to my site.

Please link my site to your site.